It’s a rare place where you can find brutal power of nature on an unforgiving rampage, where the colors are vivid and alive with a deep blue sky meeting the foaming ocean, and a rocky coastline ranging from obsidian black rocks to sprinkles of turquoise. The sea seems to be held at bay with the thinnest of clean, undisturbed sand beaches before swallowing up the majestic rocks of the rugged coastline. On even the calmest of days, the Pacific Ocean seems to be straining the sand beaches, waiting for a chance to unleash her awful power on the land, and that very land standing solid and fixed against the attack. And yet, in the midst of this activity, you can find peace and solitude. It will bring order to your thinking if you let it.

The paradox between the chaos and power of the ocean against the land and the very peace it brings might be hard to understand unless you spend time along the southern Oregon coast. One day it’s foggy and rainy and the next the sun brightens the surroundings with colors from nearly everywhere, the landscape cleaned from the rains before. 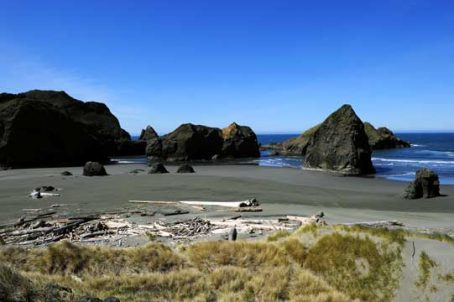 While the Oregon coastline from Brookings to Bandon is not particularly unique when compared to northern California or even the rest of Oregon, it contains a combination of places to see and things to do in a combination that makes for a very good destination spot for a few days, or even a few weeks if you have the time. It’s almost too cliché to say that the pace is slow, but when this slow pace is in the background of one of the most active and powerful coastlines, it has a new meaning.

The Oregon coast, like much of the Oregon interior, has been inhabited by native Americans for many thousands of years. The people of the coast would spend their time gathering acorns, roots and berries from the land. They hunted deer and elk along the coastal mountains and harvested clams, salmon and sea lions from the ocean water, beaches, and rivers. When Europeans began to settle the area, they found that the nearly endless supply of food resources combined with the abundant supply of wood for fuel and building materials made life in this primitive and secluded place relatively easy. Most transportation until recent times was via the ocean and rivers, and it’s therefore easy to see that the settlements are generally located along the coast near rivers and bays where safe mooring could be found for boats and ships traveling along the coast.

So what are the activities here that create such a great experience? For starters, there’s the opportunity to stand along the coast at just about any point you choose and just take it all in. You can go down to the water and stand as close as you dare to the waves. Try to figure out their patterns. You can stop along one of the many turnouts along Highway 101 from high up on the cliffs. Did you know that on a clear day, when the visibility lets you see all the way to the horizon, you can see the curvature of the earth?

From the point of view of an outsider who only occasionally visits the area, the State of Oregon should be commended for their park system along the Oregon coast. Their campgrounds and day use parks are progressive and evidently in touch with today’s modern travelers. The camp sites, for example range from primitive spaces for a tent, to full hookups for even the most majestic diesel pushers. They sometimes provide WiFi and cable. While there are many privately operated RV parks along this coastline, the Oregon Park system gives them serious competition.

Hiking trails appear to be endless along the coastline. They range from short ¼ mile excursions to adventures that can last for several miles and even several days along the coastline if that’s your interest. Just about anything you’re up for can be found at many points along the coast. You’re never far from incredible views either. Whether you’re walking along a beach with the water pounding and foaming its anger at the shore and rocks, or circling a hidden cove with sunbathing sea lions, the views are just about anywhere you look.