It’s often said that the Grand Canyon is nearly two billion years old, but that’s not entirely true. At the base of the Grand canyon, the rocks that make up the lowest layers, the Vishnu Group, are estimated to be between 1.8 and 1.6 billion years old. While very old, the canyon itself is closer to only about 11 million years.Beginning about 1.8 billion years ago, parts of the earth’s magma was cooled into the Vishnu Basement Group. Upon this group, layer upon layer of rocks were deposited in the form of sandstone, limestone and sand dunes that later were compressed into rock, and so on. This activity continued throughout time until about 270 million years ago, leaving twelve distinct rock groups in layers.

About 70 million years ago, a tectonic plate off the coast of California, called the Farallon Plate, began to subduct, or travel down into the earth’s mantle, under the more stable North American Plate. Normally, it’s thought that when subduction occurs, the plate enters the earth at the subduction zone at a relatively steep angle; sometimes at 40 degrees or more compared to the surface.In the case of the Farallon Plate’s subduction, some geologists believe that the entrance was at an angle nearly parallel to the earth’s surface. This caused far less volcanic activity than is usually the norm, and caused the western portion of the North American plate to begin to rise in the area now known as 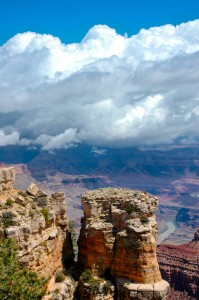 northern New Mexico, Northern Arizona, Utah, and western Colorado (the Colorado Plateau). Actually, evidence of this activity can be seen as far north as southern Canada. It was the final stage of three lifting periods for the Rocky Mountains, and is generally called the Laramide Orogeny.

Evidence that the subduction occurred in this way is in part because of two important observations. First, there seems to have been significantly less volcanic activity than expected; probably because the shallow angle did not allow the subducting layer to melt. A tectonic layer needs to descend to about 100 to 300 kilometers before significant melting occurs. Second, the layering of sedimentary rocks within the Colorado Plateau, for the most part, is still parallel to the earth’s surface. This suggests that something caused a gentle lifting from below rather than a collision, causing the surface to “pile” up on itself. A subducting layer that was traveling under another plate could cause just such a lifting action as occurred all around the Colorado Plateau. Of course, evidence of significant friction and subsequent “piling” and compressing of rocks is seen throughout the Rockies, further east and north of the Grand Canyon.

Remember that for millions of years, the area from the Gulf of Mexico north through the heart of Canada was ocean. Once the lifting began, water began to flow, and one major route was the Colorado River, through the present day Grand Canyon, and to Baja California. Because sedimentary materials left from ocean and lake deposits along the Colorado Plateau are easily eroded, water carried a large amount of sand and sediment, which caused very rapid erosion. Many geologists believe that for a significant period of time, nearly all of the sedimentary material draining off the Colorado Plateau traveled down the Colorado.

So how long did the canyon take to form? That’s a question that, until recently, was thought to be solved. Until a recent finding by researchers at the University of New Mexico, the canyon was believed to have formed in only 5 to 7 million years. Further, some geologists thought that the last 2,000 feet eroded in only 750,000 years, a geologic flash in time.

Is the Grand Canyon the grandest, deepest, or oldest canyon? Not really. There are at least two canyons in North America that are deeper. There are formations in Northern Canada that are reported to be at lest four billion years old, or over twice the age of the base rock in the Canyon. Why the Grand Canyon qualifies as a natural wonder is the unique opportunity it offers to view large scale erosion, providing a very long history, even in geologic terms in one place in nearly perfect condition.

Beyond the nearly perfect environment for geologists to study several important points in geology, the Grand Canyon provides an unmatched grand view of the world at work for the rest of us, who just want to visit and take it all in.

Visiting the Park: During the summer months, the road from Grand Canyon Village west to Hermit’s Rest is closed to private vehicles. A bus service is available that makes various stops along the road. The road out to Desert View is still open to vehicles, and probably will be in the future since it’s a state highway and has park entrances at both ends. Having said that, it’s probably a good idea to consider traveling the park using the buss system. Parking along the rim hasn’t kept up with increased demand over the years, so finding a place to park at most turnouts during peak seasons can be frustrating.

One pleasant surprise we encountered during a visit to the Grand Canyon during the peak tourist season was that most people seemed to stay in the immediate vicinity of the bus stops when viewing the canyon. Even though there’s a fabulous trail system all along the rim, it was used only infrequently compared to the other locations, so getting off a bus and hiking to the next bus stop proved to be a good way to experience the canyon with a reasonable amount of solitude. So, while we complain about the bus system, we also enjoyed its advantages by walking along the rim between stops and didn’t need to backtrack to get back to our transportation.

Where to Stay: The Grand Canyon is easily a destination. Many people will schedule a day or so here while on the way to somewhere else, but seeing all there is can easily take three days as a minimum. There are hotels and campgrounds in the park at Canyon Village, and staying there can significantly enhance the experience. Unfortunately, these hotels and even the campgrounds are quite popular and reservations need to be made well in advance. The town of Tusayan is just outside the park along Highway 64, the road that runs from I-40 at Williams to the south rim. There is one RV park and several hotels. After that, there are hotels and RV parks in Williams and nearby Flagstaff. You can see more specifics about our recommendations of where to stay in our general Grand Canyon Travel article. There’s also a short article about Williams that might be of value.