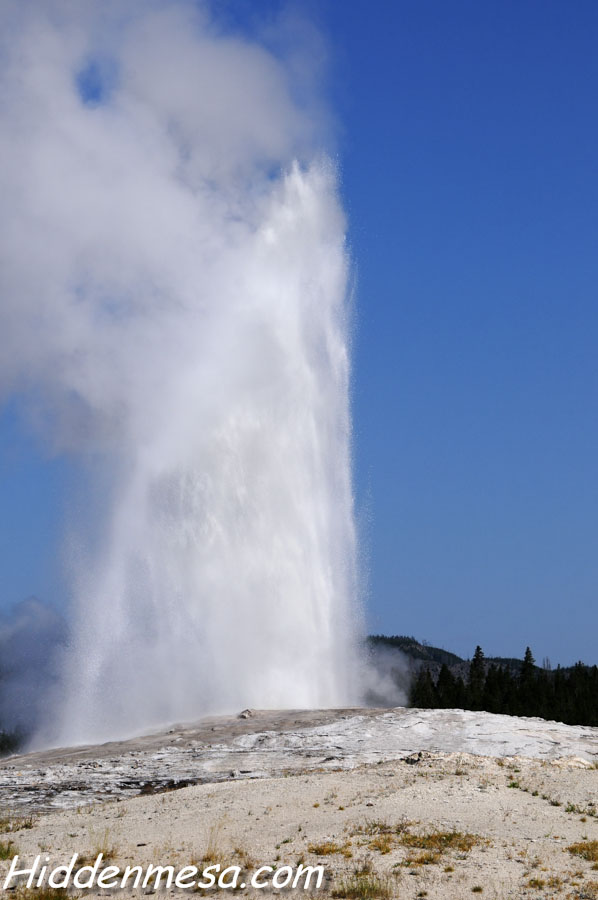 It’s a fascinating experience to stand at Old Faithful and watch it erupt for the first time. While steam and water is vaulting into the air nearly 100 feet, it’s simply awe inspiring and beautiful to see.

There may come a time, however, when you wonder exactly how this all works. And while the specific circumstances that allow a geysers to exist are rare, it’s not a very complex issue from a physical world perspective.

Consider what a geyser is. It’s basically a spring of water coming from somewhere below the surface and traveling to the surface. Basically a column of water. Now, consider the boiling point of water. It’s 100 degrees Celsius, or 212 degrees Fahrenheit, at sea level. The “at sea level” is important, because it really means “at sea level pressure”. Anyone who has ever tried to cook a pot of beans at 10,000 feet knows that it takes a really long time. That’s because water boils at a lower temperature at higher elevations. Higher elevations means that the water is under less pressure. If you took water to space, it would at some point start to boil at room temperature. Likewise, if water decreases in elevation, the pressure increases and the boiling point rises.

Now, introduce a geothermal feature to our equation. We’ll bring the earth’s magma closer to the geyser and heat the rocks surrounding the water column. We should probably heat it from somewhere down in the cavern because we want the bottom of the water column to heat up more than the top. Plus, we want the water that’s been heated in the bottom to rise to the top. Remember that hot air rises and cool air descends. So does hot water compared to cooler water.